No month is without a festival in India. This is a land which has cherished festivities with the vision of oneness in life. Each community has retained its own uniqueness and adopted some customs from others. Thus each community has its own traditional festivals.

There are as many festivals as there are communities, religions, seasons and social functions. Festivals have a great role to play in the life of man.

The meaning of festival in Sanskrit is “Utsava”. The word Utsava is derived from “Utsarati” which means “el- evates”. These festivals should be for elevating man further for linking him to his expanding existence. 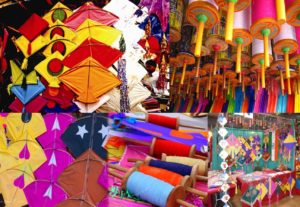 There are different celebrations that involve kite flying apart from the Makara Sankranthi festival. These occasions are specially organized by people to gather many kiting enthusiasts at a single venue. They are known as kite festivals, and are held at many places across India. They are usually a single day events, starting in the morning and go on to afternoon or till a little beyond sunset.

The kite festivals are of two kinds. One in which there is only local participation, and the other, in which people from other countries are invited to take part, bringing in international participation.

And the other is

UTTARAYAN – the beginning of the northward journey of the sun.

Religious Significance:
Most of our festivals are backed by religious beliefs and ceremonies. It is this pressure of religious beliefs that motivates man to participate in the festivals. There are changes in the atmosphere and that these changes are beneficial to human health and hence every person should expose himself maximum to the sunlight, because the sun’s rays are at an unique angle only on this day. People go to rivers, lakes, sea, beaches for bath and then go to temples or pilgrimages thereby exposing themselves to the sun. People give alms to the poor and give food and money in charity on this day.

To indulge maximum time in sunlight, people play games or flying kites from rooftops, grounds and beaches. In the eastern parts of the world, particularly in India, kite flyers indulge in kite fights. This is so exciting and engrossing that people forget their responsibilities and duties. People young and old, males and females, from all walks of life fly kites from their roof tops right from dawn to dusk. They have their meals on rooftops.

In fact, the Gujarat Government has declared this day as a Government holiday and all shops and establishments, schools and colleges are closed on this day. The rickshaw operators, taxi operators and even the tobacco, cigarette and “paan” (beetle leaf) vendors take the day off and indulge in kite flying. The streets wear a deserted look. All the traffic is in the sky which is dotted with kites of different sizes and designs violating all traffic rules – it’s free for all. They are all busy having aerial battles trying to cut each other’s kites (lines), and at every kite cut the enthusiasts shout “Kaypo Chhe” – meaning I have cut your kite. The climax is from late afternoon till dark. However, a few enthusiasts still have some more fun up their sleeve. They fly kites with lit candles inside Chinese lanterns which are tied on to the line of a kite, anywhere between 5 and 10 lanterns can be tied on to a kite. This is “NIGHT FLY IN INDIA”. Then there are the colorful and noisy fireworks which illuminate the sky. 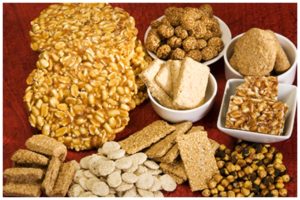 Food:
Til Chikki (ingredients being sesame seeds and sugar is important dish to eat on this day. Til is good for health in the winter season as it fortifies us against cold, and especially at the change of season, Makar Sankranti marks the end of winter, from then on, the day starts becoming longer. The wind on this day is most unpredictable both in terms of direction and speed.

Basant Panchmi – Another Famous Kite Festival
It is observed on the 5th day of the bright half of the fourth month of the Hindu calendar. This festival is called “BASANTI” OR “BASANT PANCHAMI”. It heralds the onset of the spring season.

BASANTI is very popular in Northern parts of India, particularly in the State of Punjab. A sizeable chunk of pre-partitioned India now falls in Pakistan. BASANTI is observed with full gusto and enthusiasm in Pakistan also. In fact it is a bigger Festival there and is celebrated for almost a week with colours and fragrance of mustard (yellow) and with kite flying.

Although the Basant Festival is based on the Hindu lunar calendar / almanac, surprisingly there is no corresponding date in the Islamic calendar which is also based on lunar movements. There is a difference of about 12 days, a few hours, minutes and seconds between the lunar year and the solar year. The lunar day could be of 21-27 hours depending on the season, but the solar day is of 24 hours. As per the Hindu lunar almanac, the day begins at sunrise, whereas in solar system the date changes at midnight. Thus the lunar year is shorter than the solar year by 12 days approximately every year, year after year. In the Muslim / Islamic calendar the day begins immediately after sunset. The Hindu year is adjusted after about every 33 months by having an extra month in the year. This month is called “Adhik Maas”. “Adhik” means extra and “Maas” means month. During this month Hindus perform religious ceremonies, undertake penance, give alms to the poor, go to the temples to offer prayers and take outdoor bath on sea beaches or rivers. Marriage ceremonies and other auspi- cious functions are best avoided during this month. So, after 33 months, Hindus have a year which will be of 13 months. This is something like having a leap year with month of February having 29 days every fourth year. The Muslim / Islamic calendar has no such adjustment. Therefore the dates of Hindu calendar and Islamic cal- endar do not match, although both are based on lunar movement. 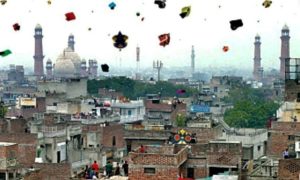 As there is no way to spot Basant in the Islamic calendar, but the people, both Hindus and Muslims are very eager and anxious to celebrate this festival, Hindu almanacs are summoned from India.

But why are Muslims also celebrating this festival ?

The answer lies in the anecdote “Amir Khusro and his master Nizamuddin Auliya (Muslim saint) lived in the 14th century Delhi during the reign of Khalji Sultans. The story goes that a particularly close nephew of the Auliya fell ill, and died. At this, Nizamuddin Auliya slipped into a long period of bereavement. For the next six months he withdrew in his shell, ate little, did not speak to anyone, not even let out a smile. This got his disciple Amir Khusro restive.

One day, Amir Khusro chanced upon a group of Hindu women who were marching and singing songs in a festive mood, and were all dressed in yellow. Curious, he asked about the occasion, and was told that it was Basant Panchami and the women were dancing and marching towards Kalkaji Mandir, still a landmark in Delhi. 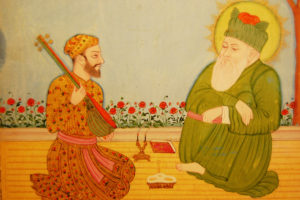 Something suddenly came upon Khusro, something fairly inspiring, for he slipped into a yellow robe and dashed to his master, whom he found sitting and mourning at the place where, subsequently, Humayun’s tomb would be built. His trick clicked, for when the master saw the devotee approach in this particular attire, he could not help feeling amused. He smiled.

The smile, legend has it, shook the saint out of bereavement and Amir Khusro decided to mark the occasion as an annual festival. And since that day it became a ritual for the community around the dargah (grave) of Nizamuddin Auliya to walk up to the Sufi’s tomb and sing ‘qawwalis’ (group singing and clapping in tunes), often composed by Khusro himself.”

Mustard crop which is yellow in colour is in full bloom at this time of the year and is ready for harvesting. Symbolically, they hold yellow mustard flowers and are dressed in the same yellow colour, which Khusro had noticed on the marching women. The significance of the Basant Festival is not in the blossoming of the flowers, but in the specific flowering of mustard, since the colour of mustard is predominantly visible only when seen together, in totality, as a collective.